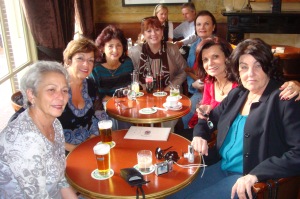 The group spent 2 nights in Amsterdam, 2 nights Brussels, 2 nights Luxembourg and 3 nights Paris. In Amsterdam and Paris, they met up with our 2 other ‘sisters’, Claudia and Rae (not pictured), who were traveling separately. A little chillier than expected and a little too much movement but everyone had a great time and enjoyed the destinations. Some of the highlights:

Note: Kodak does not allow for digital downloading of the photos so I can’t show them to you here, but you can see Irene’s album and Rita’s. If someone who was on the trip wants to send me a few photos via email, I’ll be happy to put them up.